I invented scenarios that might have taken a Sheffield boy as far as the salty sea.

A school trip? – I don’t think they did that sort of thing back then, except for the wealthy perhaps.

His family moving to find work abroad? It seems his father worked for many years for the Sheffield Water Works Company. No evidence of foreign travel.

As you’d expect in the golden days of the Empire there were military operations here and there across the globe in 1897. There were at least two sieges on the North-West frontier (a young Winston Churchill was part of one of these), and another colonial action in what is now Nigeria. There is no reason why Ernest couldn’t have chosen a military career. I suspect though that if this was the case some mention of his death in service might have found its way into the newspapers, or onto the gravestone.

But I no longer need to speculate. A new resource has appeared online recording those who died at sea 1781-1968. It turns out that Ernest Reynolds was a sailor.

A sailor from Sheffield? How many can there have been of those? How would you answer that question? Something to think about.

This is the information from the Record:

The date of death is notional – it is the date the ship left port and was last seen. The address in Westonville Terrace proves this is the right Ernest (the site of that street is now covered by the Geography department of Sheffield University)

Here is a picture of the Glenfinlas:

She was a four-masted, iron-hulled cargo ship, built in Sunderland and registered in Liverpool. She had set sail on 6 Oct 1897 from Newcastle (New South Wales) for Manila (Philippines) with a cargo of coal (3,060 or 3,700 tons according to two sources).

By Christmas Eve she was considered overdue:

The ‘Overdue Market’ is described as a way that the insurers list missing vessels, though it seems a mercenary and cold-hearted way to refer to vessels with human as well as cargoes at risk. If I unerstand it correctly the figures in guineas  represent the cost of re-insuring the ships, a high price implying that there is little hope of the ship reaching harbour.

The Glenfinlas, listed in this report at 20 guineas, was listed at 80 guineas on February 17th. Just over a month later all hope was lost and the ship was ‘withdrawn’ from the market… 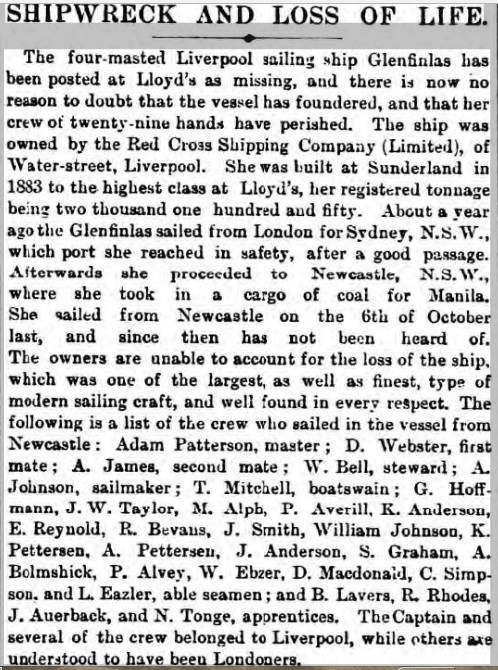 The final official word was this brief report compiled in Australia and published in London in March 1899: 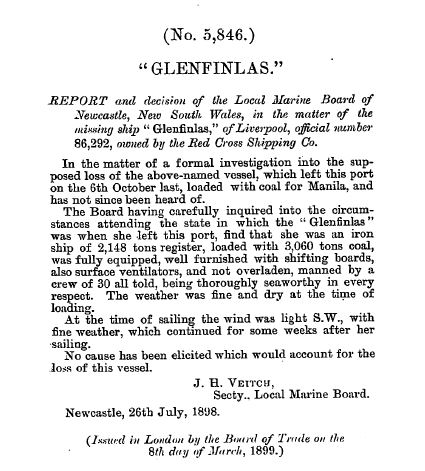 Why did Ernest go to sea? A sense of adventure, a need to get away from home?

Perhaps it was the eventual result of the strains put on the family by his father’s conviction for embezzlement in 1885. He had been collecting water rates from customers but reducing the amounts he recorded and keeping the difference. He served three months in prison, probably in Wakefield.

The family was together in 1891 but by 1901 Ernest’s parents were living apart. Only his mother (and a sister) are buried in the grave in Walkley Cemetery which records in a few words his own fate.

Bright sunsine and deep shadows. Ivy creeping up the stones.

Just a quick visit to the cemetery today to photograph a couple of graves and some trees.

Always a patch of sunlight and bluebells at this time of year. Benjamin Philip Bamforth, The King’s Own Scottish Borderers Airborne died 4th April 1944, age 20. 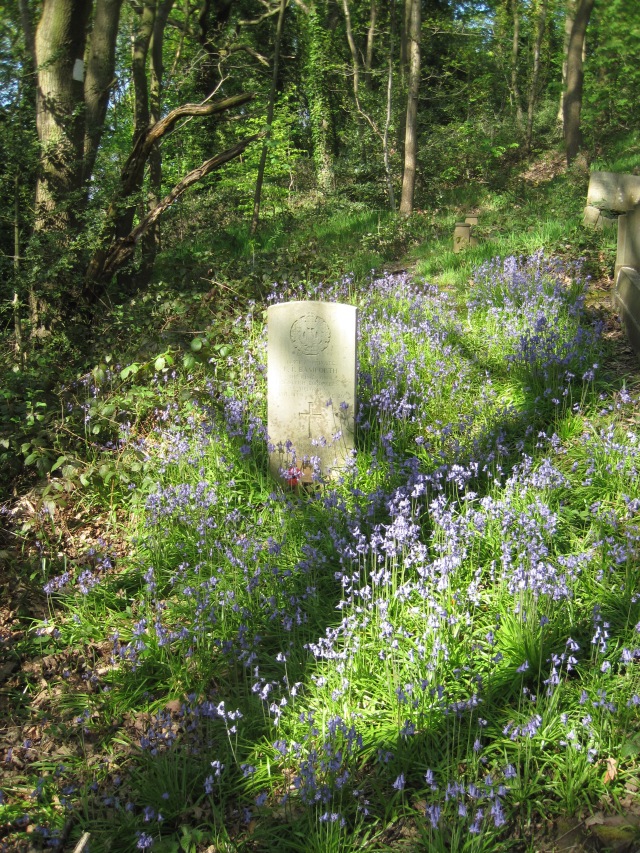 Not many cherry trees in the cemetery – blossom on this one.

Saturday 21st May 10am-3pm
Work Session in the Cemetery

We will be aiming to spruce up the cemetery ready for a summer season of events. Come for an hour or bring a packed lunch and stay for the day.

A leisurely stroll around our Victorian cemetery with Spring in full swing. Meet inside the cemetery gates in Nichols Road, off Waller Road.

“On Wednesday last, a man and his wife,
who gave the address of Elton street, Walkley,
visited Eckington in search of the parents of
an infant child who had died whilst in their
care…

The couple and their address are not revealed in this article but other evidence
shows that they were Thomas and Mary Elizabeth Slack of 41 Elton Street.

(Visitors to the Walkley Ways marquee in Ruskin Park last Saturday will have
been standing close to the site of this house).

A month ago in answer to an advertisement
for a baby to nurse at Elton street, a man carrying
a child a few weeks old presented himself at the
address named, saying he wished to put the child
with them.

An example of these advertisements (from the following year, 1888)…

A young woman having had a misfortune by him,
he had…

Our next regular work session in the Cemetery takes place this Saturday between 10 am and 3 pm. There is a variety of tasks that we may be doing, from going back into battle with the bracken (if it has not reached the spore-releasing stage) and tackling some ivy, now that the birds have fledged.

You are welcome to come for part of the day, or to bring refreshment and join us for the whole session.

We have a supply of work gloves for those who need them, but we recommend old clothes and sturdy shoes.

After so much rain in the last 24 hours we were remarkably lucky – just a minute or two of spots of rain during the whole 90 minutes. Although the conditions under foot restricted the steps and slopes I was prepared to risk taking the party down, it was an enjoyable tour. I got the chance to tell some new stories that I had been keeping to myself since the last tour when nobody came.

Our next tours will be the three in one day on July 6th, so if you are not planning to be following Le Tour that day, come for a leisurely walk round on one of our non-wheel-based-transport tours (sadly without feeding stations). 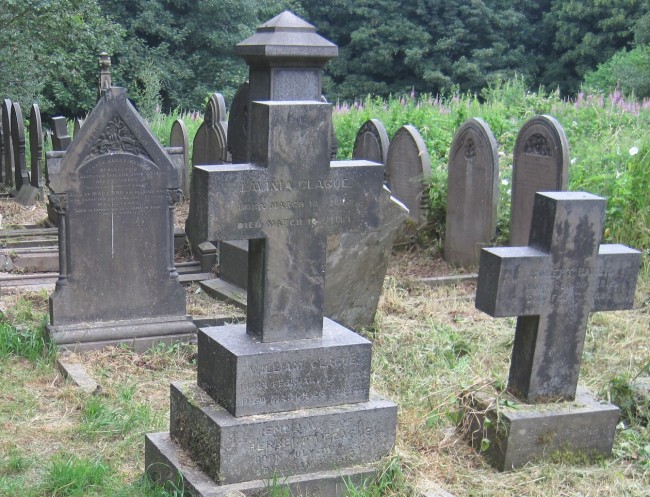 Here are some of our events over the next few months:

Come and help us record the inscriptions on recently cleared gravestones. All equipment and instruction provided.

An illustrated talk on our first ten years, including popular stories told on our guided tours, followed by our AGM. Display of photos and research materials.
Free Refreshments from 7pm.

A Walkley Festival Event
Our annual assault on the bracken in the cemetery.

For events in the cemetery meet inside the main gates on Nichols Road
(off Waller Road) postcode: S6 5DU

The first Vicar reads his own obituary

The Rev. Thomas Smith. (From Sheffield at the Opening of the 20th Century(1900))

The actual obituary of the Rev Thomas Smith mentions that there was a previous, premature, outing for the summing up of his life and career, in the Sheffield Independent. I have finally managed to track it down. The episode is most entertainingly described by that newspaper’s rival, the Sheffield Telegraph! 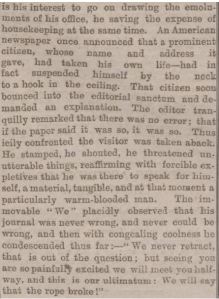 When Thomas Smith died in 1901, the Telegraph added to the above story…

A Sheffield newspaper appeared one morning with the
announcement of his death, followed by an apprecia-
tive sketch of his career. Fond of a joke, he called
at the office of the paper in question to return thanks,
and next day preached from his own pulpit from the
text, “Can these dry bones live?”

Each summer as part of Walkley Festival we run three back-to-back guided tours of the cemetery when you can hear stories of Walkley residents resting here and enjoy the semi-wildness of the cemetery in high summer. Each tour lasts 90 minutes; meet just inside the cemetery gates in Nichols Road (off Waller Road)

Once again the weather has frustrated out plans to work in the cemetery.
Current conditions and the additional snow forecast for tomorrow mean that
this session, like January’s, has been cancelled.

Our next scheduled Work Day is on Saturday April 20th, 10am-3pm. But I am
also hoping to hold a short session on Wednesday April 3rd, 10am-1pm.

Other dates for your diary:

Tuesday 16th April, 8am-10am
Bird Walk with John Robinson of the RSPB.
This has become a popular fixture in our calendar.
Join us for a leisurely stroll around the cemetery
identifying birds from their songs and calls
with John’s expert help.

For both these events, meet at the cemetery gates, Nichols Road, off Waller
Road.

Posted in News, Upcoming Events | Leave a comment
Nature Poetry at the Crags

TaphoTribes
The Victorian Book of the Dead

A book on the popular and material culture of Victorian death and mourning.

Tales from graveyards and cemeteries, moving stories of bodies

death and burial through an archaeological lens

'Ginger,' 'Bits,' 'Whinge,' and other U.K. expressions that have got popular in the U.S.

This is a writer's blog for authors, business people, creative people, freelancers, journalists, publishers, and poets. They will learn the ins and outs of writing for publication. Both beginning and experienced writers will profit from it.

Poems: NaPoWriMo18 and beyond

Museums of People // Libraries of the Dead

Doctoral journey amongst the dead.

Poetry from the Edgelands

A Journal of English Senryu